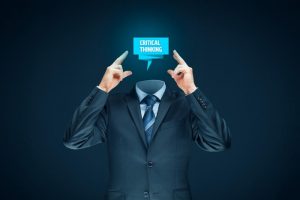 Albert Einstein said “Whoever is careless with the truth in small matters cannot be trusted with important matters.” But what is the truth? How is it determined? In this era of calling everything that doesn’t agree with your position as fake, it is important to consciously think about what you trust. It is also important to be able to think critically about what is being read, watched, and listened to so that facts can be found – especially given the evidence of the purposeful spread of misinformation on social media.  While the obvious application for this may be today’s political environment, it is just as true when implementing a project. Projects cause problems and conflicts – the team must be able to critically sort through the data, identify biases, and come up with fact-based solutions.
I had some early training in critical thinking. When I was in high school I took a Modern Literature class. The course syllabus described reading contemporary works. However, Mrs. Kendall-Brown, our teacher, had a much broader goal for the class. Her goal was to make us critical thinkers who could discuss controversial things productively. The books she selected included: Slaughterhouse 5, A Clockwork Orange, Grapes of Wrath, Catcher In the Rye, Animal Farm, Stranger In A Strange Land, etc. Her words were, ‘These books have been banned in the past. Someone in the future will try to ban them again. We are going to read them, discuss them, and then you can make up your own, informed mind.’ Key to forming our own perspective and opinion, she taught us, was asking questions, doing research, and having open discussion. She wanted us to be able to critically evaluate what was presented and then, being informed, make up our own minds.
When evaluating the veracity and validity of information, consider the following questions:
Since some bias almost always exists, these questions help determine how much bias exists and how far is it skewed. While there are multiple types of bias, project teams are particularly susceptible to information bias – or, the belief that the more data you have, the better the decision or solution will be. At its extreme, we called this ‘analysis paralysis’. A team that uses questions like this and practices critical thinking is less likely to get caught in this paralysis.
Build these critical evaluation skills on a foundation of common team purpose and it will also build trust within the team. It is a shorter, quicker path to finding out the ‘truth’, creating confidence across the team, and credibility in the information that is used and communicated out.
Posted in Uncategorized