During my last trip of 2021, I experienced a breach of behavior norms.  I was at the airport and standing in line to get cash from an 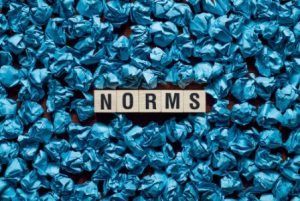 ATM.  A man was standing in front of the ATM pushing buttons on his cell phone.  The ATM screen was blank and he wasn’t interacting with the ATM at all.  I waited several minutes and then said, ‘Excuse me – are you finished with the ATM?’  He said, without looking up from his phone, ‘No – and you should shut up – b*#^&’.  I replied, ‘Really?  That is your response to a polite question?’  He then replied that I should ‘shut the f#&@ up’.  ATM guy’s behavior was unexpected and outrageous.  It wasn’t normal, breached public behavior norms, and felt like an unprovoked attack.  It also made me think about what we treat as normal and acceptable – especially behaviorally.

While we can’t control people’s behavior in the public space, we can set and reinforce standards in the workplace.  Whether we are face-to-face, on a virtual platform, in the office, or at an offsite, company function; acceptable behaviors must be identified and established as the organization’s behavior norms.  In the past we didn’t have to be as explicit about what was acceptable and not acceptable behavior.  In classes, I used to use the example of not hitting someone as an example of a behavior norm that didn’t need to be specifically and openly stated.  It was just understood that we weren’t going to strike each other.  However, with societal norms eroding (think flight attendants being assaulted) and public figures displaying more and more outrageous behavior, a clear definition of what behavior is acceptable is essential.

To get started, consider these areas for behavior norms.  What behavior is acceptable and not acceptable?

The behavior must be described in behavioral terms – in a way that individuals can tell when their behavior is acceptable or not, and others can tell when someone’s behavior is acceptable or not.  The language cannot be ‘do better’ or ‘be polite’.  It must be ‘listen without interrupting during meeting’.  Once established, education and a window of practice will set these behaviors as the standard ones across the organization.

These behavior norms, plus hard number results, are the foundational expectations for performance management.  The discussion to develop the behavior norms drives clarity and inclusion.  Making these norms overt and obvious lets people know what is expected of them, and what to expect in how they will be treated – setting the culture.  Adam Grant said, “The culture of a workplace – an organization’s values, norms and practices – has a huge impact on our happiness and success.”  As the new year starts, determine and implement your acceptable behaviors – make the impact!