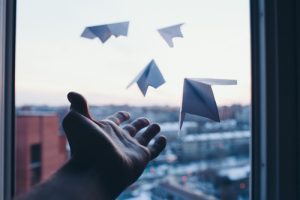 I just spent 3 days with my mom practicing ‘letting go’.  She is in the phase of life where she is evaluating her possessions – deciding what should be thrown out, what should be kept, and what should be given away immediately or later on.  While this wasn’t the first time that we have talked about, or worked on, this, it was the first time we had physically been together with all of the possessions.  Several things surprised me.  First of all, it is so easy to collect loads of stuff when you have lived in the same location for 20+ years.  Secondly, in the beginning my mom seemed to be emotionally attached to all of her possessions equally.  It was only after a conversation (sometimes several of them) that she prioritized what was most important – but still difficult to say ‘OK – that can go’.

It was easy to understand some of the why.  She is the daughter of Depression Era parents.  She was taught to keep everything – just in case.  It really didn’t matter which item we discussed, there was a story from the family about letting something go and then needing that exact same item less than 2 weeks later.  When you grow up during a time of great uncertainty and lack having what you need, it drives a habit of keeping things for the ‘just in case’ time.

However, the deeper challenge is giving things up, and the feeling of loss that can be the ‘partner in crime’ with the giving.  Especially when there are things that have been in the family for a long time, giving them up can feel like you are giving up the memories, and the people, associated with those memories.  This was most significant when mom and I talked about the two treadle sewing machines in her basement.  They belonged to each of my mom’s grandmothers.  She has special memories of being with her grandmothers of learning how to sew with them and using the machines.  When I suggested that she give away one of them, she looked physically ill and said she couldn’t do it.  It wasn’t until later that I realized it was like asking her to choose which grandmother she liked more.  Giving up some of her possessions is a big change and this instance she just couldn’t go there.

This same situation occurs in the business world with change.  The existing processes, procedures, and setup are like our treasured possessions.  When something comes along, like a merger or being acquired, we have to change.  That means letting go of what was and what we had.  This can be very difficult – especially if you don’t know what you might be walking into.  It is like having a great baseball team.  Then, they are acquired by a new company who tells them that they now get to play hockey.  Without specific skills to implement the change effectively, no one will let go of their cleats and their gloves.  They will continue to try to use them – even though it makes no sense on the ice.

Regardless whether it is a personal or business situation, there are things we can do to make it more effective for those who are letting go.

At the end of the day, it doesn’t matter if it is working with my mom or working with a business – skills in dealing with change are mandatory!  Change is change and everyone involved with the change – leaders, implementers, participants, and family need new skills.  Skills enable those going through a change to be clearer about what they want, more flexible about options, and more responsible for getting what they need.  Change may be inevitable and ‘nothing endures like change’, but few people focus on how to support people through their change.  Get the skills and be that person – your team and your mom will thank you for it!