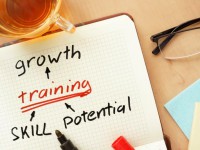 I spoke recently at the national convention for a professional organization on the topic of change. Several questions were asked about how do you prepare yourself for the change – especially if that change might include a downsizing or layoff. Most of the audience raised their hands when asked who was currently in the middle of an organization change – and three people were actually going through a merger.

The three people in the middle of mergers said that things were ‘awful’ – the merger process was long, drawn out, they weren’t sure what was going to happen, would they have jobs in the end, etc.  Bottom-line – none of the three trusted the ‘no layoffs’ announcement that had been made at the beginning of this change.  They all believed that they would be ‘on the bubble’ for a period of time and then the truth would be told – people would be laid off. After all – what was going to pay for the cost of the merger?  You could see it on their faces – they were living with a level of uncertainty that was driving them crazy.  As a consequence, resumes are being update and job exploration is happening – even for employees who the company doesn’t want to lose.  These are the ‘regrettable losses’.

Any change is hard and there is always uncertainty, but these folks were in limbo – and suffering for it.  Such is the state of organizational changes today – companies go into them without the necessary human skills and willingness to minimize the suffering.  The manner in which the change is conducted is totally controllable.  Done poorly, people get scared, hang on tighter, and do whatever it takes to not be the person considered for letting go.  Done well, it is still hard, but people feel supported (staying or eventually going) see possibilities, and know that they will be OK.  My colleague John always says ‘Changes are hard; but the suffering that gets created is entirely optional.’

If you don’t want suffering, there are steps that can be taken to minimize it.  An added bonus is that these steps also make the change process easier, enable people to adjust to the new situation, feel like they have some control over what is happening, and enable everyone to shift from being reactive to being proactive. Here they are:

Building skills brings more of the change into your control. All of the employees are watching how the change is being done. Choose to do it differently and minimize the suffering. Those who leave will speak better of you. And those you want to stay – will have opted in – re-committed to being there.