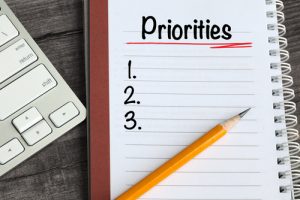 As a young department line manufacturing manager, I had many reviews of the results in my department.  I remember one review in particular with my plant manager.  He acknowledged where we were doing well and asked several questions about what had not been done during that quarter.  He then proceeded to tell me that he had a couple of additional items that needed to be improved during the next quarter.  I then asked, ‘What are the priorities?’  It was clear that we had made the significant progress, in that quarter, because we had focused the limited resources on just a few key activities.  My plant manager quickly responded by saying said, ‘They are all priorities.’  While the comment may make you want to give up, it also recognizes that setting and maintaining priorities is a challenge and a process.  Some of the key challenges with managing priorities include:

Too Many Priorities – Having too many priorities is frequently the biggest issue.  Without a few, clear priorities, resources are spread across too many things, diluting effort and focus.  Karen Martin, author, said “When everything is a priority, nothing is a priority.”  How often is work put onto the plate but given no priority?  Then we wonder why teams are working 70 hrs/week pulling in opposite directions.  Most people can only work on 3 things at most.  Anymore, and you can’t spend enough attention on any individual item to make significant progress.  Let’s face it – if the work and issues were simple, they wouldn’t need to be a priority, because they would have been already solved by the people who came before us.  If the issue is still around, it is likely complicated and requires concerted thought and research to find a solution.

Overriding Priorities – Priorities can be overridden.  Sometimes, it is appropriate.  But far too often, this happens when there are insufficient definitions for what is important, what is urgent, and what is an emergency.  What is important should never be sacrificed for what is urgent!  Without both clear priorities and clear definitions, everyone is at the mercy of the loudest voice – whether or not it is actually the most business beneficial work.

Unprotected Priorities – Priorities must be protected.  If more items are added to the priorities, the effort is diluted.  Rather than being able to spend 2 hrs/day on three priorities, you end up spending 30 minutes/day on 12 priorities.  Studies show that it takes about 30 minutes to get to a deep level of concentration and focus to make significant progress on an issue.  So, just as you are getting ‘into the groove’, it is time to switch to another priority.  While it may appear that everyone is ‘busier’, this won’t produce the desired solutions and sustainable business results.

Removing Priorities – Lastly, priorities must be periodically reviewed and ranked for effectiveness.  Which priorities are providing the desired business results?  Which ones are not?  The ones that are not delivering business results should be removed so that ones that do make an impact can be adopted.  The removal of the priority or ‘taking work off of the plate’ may be the hardest thing to do.  There is always momentum to keep going with existing work.  And, no one, who wants to advance, wants to admit that they can’t do any additional work.  So, the plate overflows and little gets done with excellence.

So, when setting up the work for your team, identify what is most beneficial and business important, and laser focus on those priorities.  Johan Wolfgang von Goethe said, “Things which matter most must never be at the mercy of things which matter least.”  Be thoughtful about what work is most important; be clear if, and when, those priorities could be overridden; protect them against dilution and distraction; and don’t be afraid to replace a priority that isn’t delivering.  Actively managing priorities will focus the team and is the only way to really make substantial progress against the tough issues.