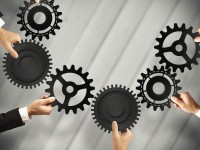 Sam’s company is going to merge. The other company is about the same size and in a complimentary market. The financial benefits from the merger are obvious as the merger will open up new sales areas for products and services. And, the expected business increase means that no employees will be laid off. The boards of directors and the executives, of both companies, have looked at the financials and everyone is eager to proceed. Sounds perfect, doesn’t it? Unfortunately, a great business match — financially and legally — doesn’t guarantee success. A 2003 Federal Trade Commission report, “The Effects of Mergers and Post-merger Integration,” showed that in a majority of U.S. mergers, sales growth actually declines post-merger for both entities. The number one reason mergers fail is the inability to successfully combine the two work groups.

To find the reasons for failure, look inside the company, below the executive level, and before the actual merger. The seeds of failure are planted when the proposed merger is a rumor. Once the rumor is heard, it spreads like wildfire. Employees at both companies begin wondering (usually out loud) what changes the merger will bring them. The fact that no one will lose their job does nothing to quell the rumors and the talking about the (often negative) possibilities of what might happen. And, in reality there will be many changes for the employees, both in their jobs, and in the rest of their lives – even if they are able to keep their jobs. Some employees will have to decide whether or not to relocate to retain their jobs. Some employees will have to learn to do new jobs as functional areas are consolidated. Some employees will have to learn new ways of doing their same work. There will be new jobs, new work, new bosses, new tools, new software, new team members, etc, etc. So, while on the outside, the merger may look simple with few changes – on the inside of both companies, to the employees, the change is HUGE.

Threaded through all of this is the fear that this merger is really the first step towards layoffs. Even if employees believe that there won’t be any immediate job losses, what happens a year or two from the merger? The merged company will have had time to consolidate operations and should being seeing some economies of scale and efficiency. People will spin out all the possibilities, creating ‘Stephen King – like’ scenarios of what might happen – always dark and usually based on very little data. A merger possibility can have employees believing that they will lose their job, have to put their family on welfare, and will never be able to send their kids to college – all in about 2.2 seconds. And, people will start reacting as if it is the honest truth of what will happen. Consequently, no matter how logical and beneficial the merger may be for the company, people will not handle the change well unless they get over their reaction. And, should there be a snag in the merger negotiations, the rumors and reactions run wild like pouring gasoline on a fire. Will the companies merger? Is there merger off? People become absorbed in these conversations and find it difficult to focus on the work of the day.

To close this gap and regain focus, new skills are needed, by both managers and employees. The managers must learn listening and presence, conflict resolution, and acknowledgment of others. They must understand that even though this may not look like a big deal for them, for many employees it is a major life disruption. They must have the skills and patience to let people go through the process of adjusting to a change and not shut them down with a comments like ‘OK – enough complaining, just get back to work.’ Employees must learn how to work through their reaction and to assist their colleagues in doing the same. Additionally, they must learn how to make clear requests – not complaints – so that they can get what they need. Only by gaining skills and working through their reaction, will they be able to leave their anger and fear behind, see the possibilities the merger brings, and move forward to effectively and openly work in a new job function or with a new team. As people work through their reaction, new behaviors will be demonstrated and people will open up with concerns, feedback, suggestions, and requests. People will feel like a part of the merger effort, instead of feeling like it is being done to them. They can then leave the complaints, reclaim their commitment, and help make the merger successful.

In reality, all mergers, even ‘friendly’ ones, cause massive, disruptive change. With change comes fear, anger, and resistance. With skills, these can flip into excitement, challenge, and opportunity. Which path are you and your organization preparing for?