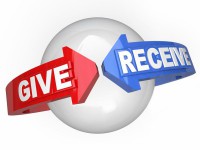 Have you ever had one of those days when you think that society is going to hell in a hand basket? When you have been cut off on the freeway or someone has cut in front of you in line – after you had been waiting for 20 minutes? No one even seems to say ‘please’ or ‘thank-you’ any longer – you wonder if common courtesy is a dinosaur. When these situations happen to me, I usually yell at the other person and then think ‘Well – Karma will get them eventually.’ Karma refers to the Hindu and Buddhist principle of causality where the intent and actions of an individual influence the future of that individual. What would happen if we believed this? Might we all behave a little better if we believed that Karma was waiting for us in the future? Might we see more common courtesy?

I had an opportunity to experiment and observe courtesy during breakfast at a local pancake place prior to a meeting. Not having young children, the fact that the day was Halloween had passed me by. Imagine my surprise as I opened the door and saw 60 people waiting for tables. As it turned out, the grade schools had a vacation day AND the restaurant was offering free pancakes for kids for Halloween. This resulted in absolute chaos inside the restaurant and a 40-minute wait for a table. Most of the parties were composed of a frazzled parent and at least 3 kids under the age of 8. Many people stepped inside the lobby, saw the craziness from the door, and walked right back out. I stayed, and watched how everyone behaved in this environment. I see so many examples of people getting upset over the smallest slight or inconvenience – I wondered what would happen in this truly inconvenient situation.

What I saw were many examples of really good, courteous behavior. The wait staff was terrific – working hard, staying polite, and being friendly and positive in the midst of the noise and countless 2-year olds throwing half their pancakes on the floor. In another example, an adult man with two young sons waited 20 minutes for the cashier to pay for breakfast. He could have walked out and not paid – and no one would have even noticed. But he didn’t – setting a responsible example for everyone in the lobby. Lastly, several times I heard a mom or dad say in the lobby, ‘Johnny – get up and let the grandmother sit down.’

These were just regular behaviors of common courtesy. They helped the situation be more tolerable, function better, and maybe earned Karma points. As I drove home I realized that I notice when I get a ‘thank-you wave’ for letting someone change lanes in front of me; I notice when someone says to the sales clerk ‘no, she was here first’ when I was in line before them; and I notice if someone says ‘thank-you’ when I have held the door open for them. These little acts make me feel like I am interacting with another human being, not just some ungrateful, faceless jerk in the BMW.

The results of my observation experiment showed me that while there are jerks out there, common courtesy is not dead. And, it doesn’t take much courtesy to tip an impression to the positive side. As for believing in Karma, I am still on the fence about it. I would like to believe that in the end justice prevails – and if you do good, you’ll get good; and if you do evil, you’ll get that too.

I practiced on my last flight to Houston. I was in a coveted aisle seat with an empty seat in the middle. A mother with two young girls walked up to my row. The mother was explaining to the 4-year old that she needed to sit in the middle seat next to me, while the mother and younger sister would be in the middle seat across the aisle. The 4-year old had none of it, and came to a complete stop in the aisle – stubbornly looking at only the floor.

I looked at the mom and girls, then nodded at the man sitting across the aisle. He smiled and stood up, allowing me to move into the center seat next to him – giving two seats together for the family. The mother was extremely thankful, and so was the airline staff as the 4-year old was holding hostage the boarding process. My new seatmate said to me, ‘You didn’t have to do that.’ I said, ‘I know, but I remember what it is like to travel alone with kids. It just seemed right. And, it scores points with Karma.’ Several minutes later he nudged me, pointed to the aisle, and laughingly asked, ‘So – do you get bonus points with Karma on this flight?’ Boarding the plane were 6 Buddhist monks. Does our current intent and behavior influence our future? Maybe, maybe not – but why not score a few points with Karma along the way?