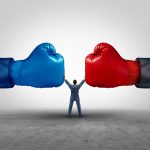 When I teach project management skills, I am frequently asked:  What is Most Important Skill to Have as a Project Manager?  They are sure that my answer will be the technical skills of understanding the project plan and schedule.  Or being able to manage the cost model and run some elaborate cost analysis.  My answer almost always surprises the audience.  It is conflict resolution.  You must be superb at surfacing conflicts and facilitating conflict resolution if you want to be a successful project manager.  Unresolved conflicts devastate many projects and the only way to avoid the devastation is to have the skills to resolve them.

The impact of unresolved conflict on a project implementation is vastly underrated.  It nibbles away at the productivity of people being able to complete their work in the expected time frame.  It also damages the relationships between people who are handing partially completed work down the line to the next person or group.  When the relationships get damaged, the personal commitment to ‘not make the next person’s life miserable’ can disappear.  Successful project time and budget delivery is dependent upon the series of work actions happening in the right sequence on the right timing.  If something disrupts the work flow, time and money are wasted.

Take the example of Sam and Tom.  They have just come from a project team meeting where they had an argument about a topic that has been an issue between them for some time.  They left the meeting without any resolution on the issue – they have an unresolved conflict.  Tom returns to his work-space and realizes that he forgot to ask Sam for something.  Sam is the only person that can provide what Tom needs – and, he can’t move forward on his tasks until he has an answer from Sam.  Tom picks up the phone and dials Sam’s number.  When his call goes to voicemail, he leaves a message and then begins composing an email to Sam.

Simultaneously, he is making assumptions about why Sam did not answer his call.  Maybe Sam just wasn’t in his office to catch the call.  If Tom believed this, he might just follow-up with the email and be done with it.  However, in the context of the unresolved conflict, other thoughts and suppositions may surface.  Was Sam really there and just ducking his call?  Maybe Sam saw Tom’s caller ID and consciously decided not to answer.  Maybe Sam decided to delay answering as a punishment.  After all – it is Thursday afternoon at 3pm.  Tom will get the voicemail and respond tomorrow – or, maybe not respond until Monday – depending upon what comes up on Friday.  All of these potential delays put Tom’s work 3 days late in delivery.

If these thoughts are going through Tom’s head as he puts together the follow-up email, it is likely that the tone of the email will shift.  It will be sharper and might even be a little rude.  And, it may also get cc’d to Sam’s boss.  If Tom is really upset, he may copy the entire project team – bringing new people into the situation.  Now, those new people are reading the email and beginning their own thoughts about what is going on with Sam and Tom.  Not only is Tom diverted from doing the actual project work, but all of them are as well – taking productivity down the rabbit hole for the project.

I have personally seen all of these situations.  Sometimes there is a darker motivation going on when that phone call doesn’t get returned.  Most times, someone was just grabbing a cup of coffee or visiting the bathroom.  Under normal circumstances we would be a little more patient and not so quick to jump to conclusions.  BUT – in the context of unresolved conflicts, the jump to assumptions about ‘why they did not answer’ is short and fast – and usually negative.  And, the consequences, regardless of the real reason, are lost time and money as focus is diverted from getting the real work done.

Margaret Heffernan said, ‘For good ideas and true innovation, you need human interaction, conflict, argument, debate.’  True – and, you also need to have the companion skills to resolve the conflicts.  Unresolved conflicts take people’s energy and productivity down the drain.  Build the skills for finding and quickly resolving the conflicts – it will build the team relationships, enable a more trusting environment, head off issues before they become monsters, make the project more fun, and create an atmosphere where project team members want to come back and do another project.  It will support delivering an on-time, on-budget project!

Let us know how we can help you build these skills for you and your team!